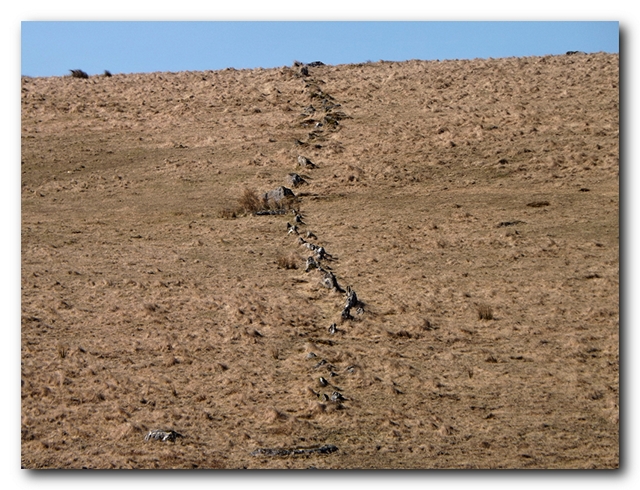 Sinuous alignment ascending the hill at Dry Lake Ford. View from the south.

The longest prehistoric stone row in the world is of the single type and  measures 3,386m long, including around 922 mainly medium and small-sized stones together with some large orthostats situated in the Erme Valley. The row, which is sinuous in character is orientated north to south has a sea view reveal and visual links to the landscape.  There are cairns at the both ends, the one at the south is kerbed and the upper one at the north is surprisingly small and nondescript. The row passes through a landscape rich in prehistoric archaeology.

Category: Plausible. No substantiated doubts have been expressed regarding the prehistoric interpretation of this row.

The sea is visible from the northern end of the stone row. Viewshed analysis originally identified this visual relationship and Neil Mortimer has kindly provided the fieldwork evidence. A photograph taken by him from the cairn at the northern end of the row shows two slivers of sea separated by Stalldown on which Hillson’s House cairn can be clearly seen on the skyline. The point at which the sea becomes visible is not currently known but it is likely to be near to the end of the row and the siting of the terminal point is likely to have been influenced by the sea.  It feels as if the row is seeking a sea view and once achieved it happily stops after its marathon journey. This row provides further evidence for a relationship with the sea and in turn contributes to our appreciation that the rows were often intimately linked with their landscape.

Looking south from the Green Hill cairn at the northern end of the row with the sea views either side of Stalldown highlighted by an arrow (© Neil Mortimer).

A more detailed view of the sea views from the Green Hill cairn at the northern end of the stone row (© Neil Mortimer).

Kerbed cairn at the southern end of the row. View from south.

Stone row leading from the kerbed cairn. View from south (Scale 1m). Prehistoric enclosed settlements are visible above Hook Lake in the background.

Upper length of the row and kerbed cairn. View from the west.

A length of the alignment with prehistoric settlements and Hook Lake row beyond.

The Stalldown row and Hillson’s House Cairn are visible on the skyline from the southern end of the row. View from north.

The near length of the row is aligned on the cairn but it changes orientation to pass to the east. View from south.

The row leading across the hillside passed a large cairn.

The row is composed of stones of very different sizes. 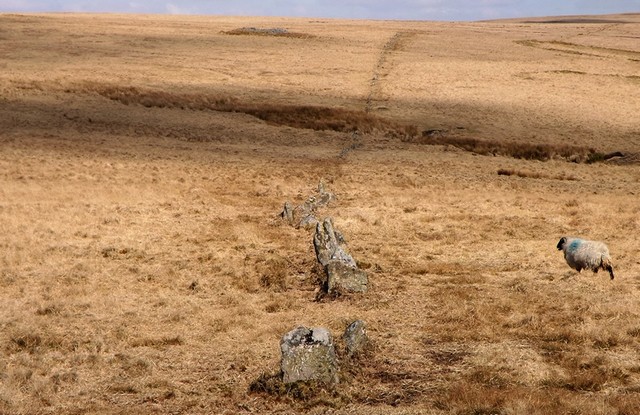 The row winds it way passed a large cairn. View from the south.

This length of the row consists mainly of medium sized stones. View from north.

View from north looking along a well preserved length of the row. 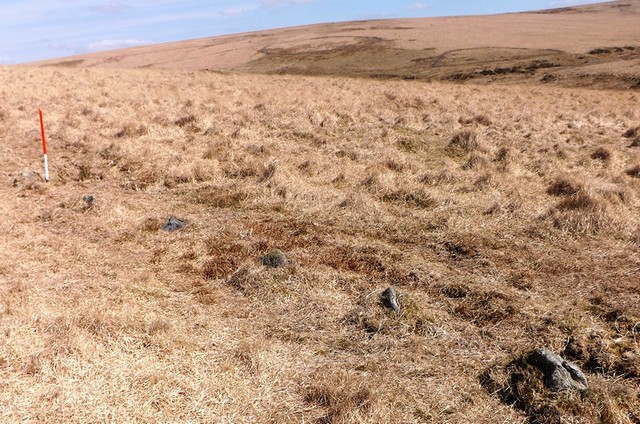 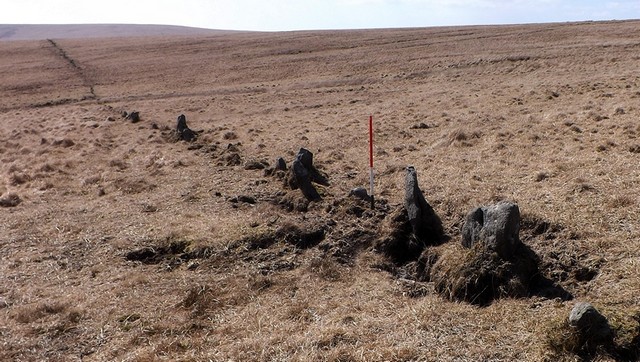 The scale of this row can be appreciated from this viewpoint. View from north.

The row is far from straight. This length has a significant curve. View from the north (scale 1m). 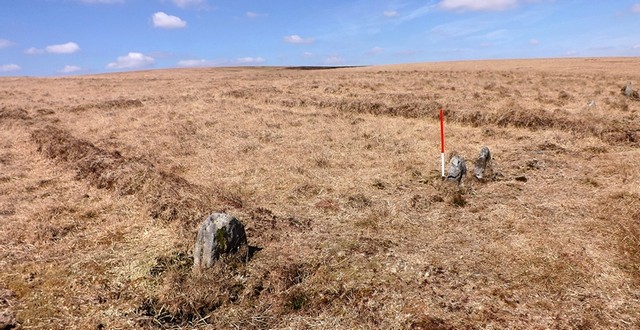 Some of the stones have been exposed by peat cutting. View from south east (Scale 1m).

Sinuous length of row within an area of historic peat cuttings. View from south. 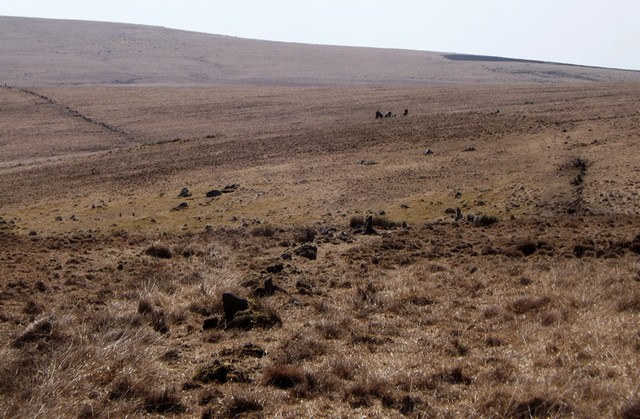 From this viewpoint the sinuous character of the row is clearly apparent. View from north.

From this viewpoint the sinuous character of the row (highlighted) is clearly apparent. View from north.

In places the row is completely buried beneath deep peat. At this point a stone is exposed and illustrates the considerable depth of the peat. This exposure provides an opportunity for environmental and dating analysis. View from north (Scale 1m). 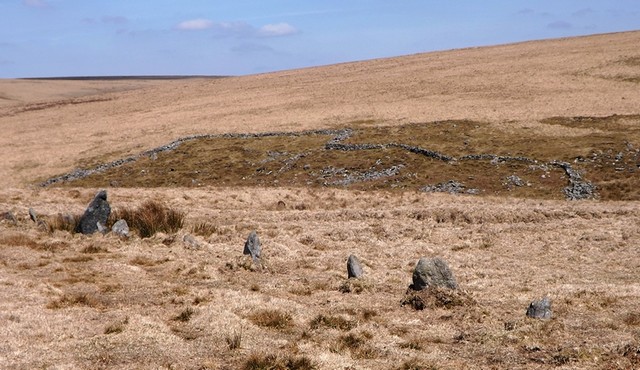 The stone row passes Erme Pound which is a prehistoric enclosed settlement which was re-used in the historic period. 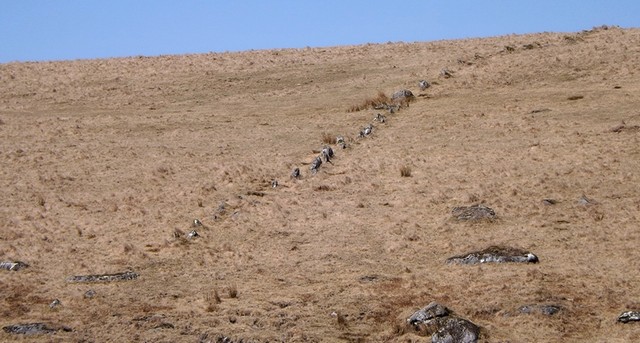 Some large stones in the vicinity of the row were not utilised by the row builders although at least two substantial orthostats were incorporated. View from south.

The row winding up a hillslope. View from south (Scale 1m).

The row winding up a hillslope. View from south (Scale 1m). 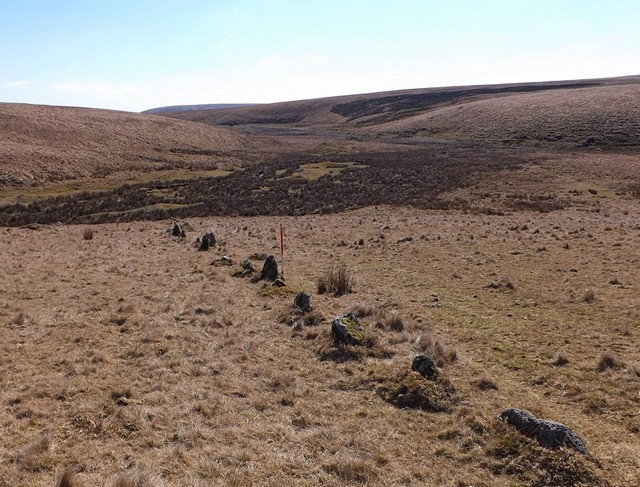 Looking south along the row. The tin streamwork earthworks beyond will have truncated the row in this area (Scale 1m). 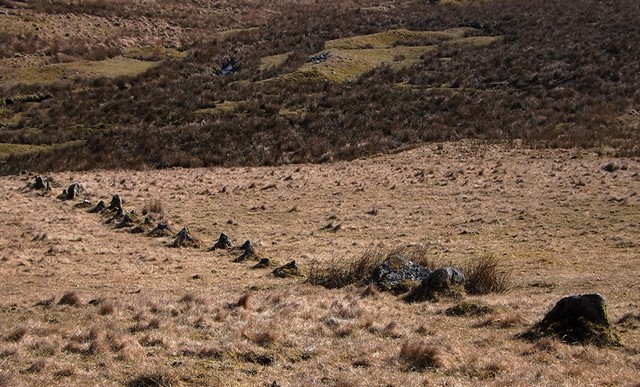 Throughout the length of the row the size of the stones varies considerably. View from north.

Throughout the length of the row the size of the stones varies considerably. View from north east (Scale 1m).

Cairn at the northern end of the row. This unimpressive mound contrasts markedly with the scale of the row. View from south (Scale 1m).

A mixture of small and medium sized stones.

View from Stalldown. The photograph below highlights the route of the alignment.

Only part of the alignment (highlighted) is visible, but from this angle its sinuous character is very obvious.

This has never been an easy row to get to. When visited in 2013 car parking was available at SX 62524 61120. Recently (2016) this car parking area has been closed making it much more difficult to access this part of the moor. An alternative car parking location is at SX 64342 59548. From here the easiest way to reach the row is probably to head east to the Two Moors Way at SX 65765 59965. Then follow the track north to SX 64683 63454. From here navigate north west taking care when crossing the River Erme. Given the effort to get to the area it would be a good idea to have a look at the Hook Lake Row and if you have time the splendid one on Stalldown as well as some the amazing prehistoric settlements.  Another option maybe to park at SX 60395 70806 and approach the row from the north via Crane Hill. A full day but hopefully a rewarding one. Best contemplated in the summer.