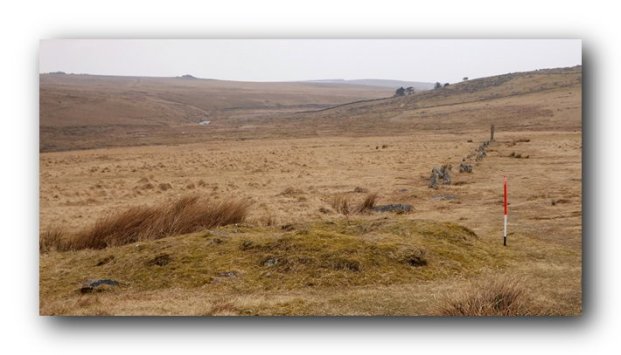 The southern alignment at Drizzlecombe has a cairn at the upper end and large terminal pillar at the far end.  The valley below has been scoured for tin from prehistoric times. View from the north east.

On the lower slopes of a pronounced spur leading south west from Higher Hartor Tor is a remarkable prehistoric ritual complex including three stone alignments and at least 22 cairns. The rows are set close to each other and all of them have a cairn at the upper end. The terminal stones at the lower end of two alignments tower above the others which look tiny by comparison. In common with many rows the size of the stones varies considerably with many just protruding through the turf. All three terminal stones were re-erected by the Dartmoor Exploration Committee in 1893 following excavations to identify the sockets.  Several other stones within the rows had also fallen but these remain recumbent.  However you define special the Drizzlecombe area must surely rank amongst the best.  There is something for everyone. As well as the prehistoric ritual monuments there are several well preserved Bronze Age settlements and from later periods there are fields systems, tinworks. Whichever way you look there is archaeology starring back at you inviting exploration and discovery. There is plenty to keep you occupied, so much to see and ponder.  It is therefore with some trepidation and at the risk of overload I am going to suggest that as well as looking at the archaeological around your feet that (weather permitting) you look towards the south west for views of the sea.  The location of Drizzlecombe means that these views are tightly focussed but as elsewhere they would seem to suggest deliberation. In common with several other sites the alignments sit within a valley location and are nearly surrounded by hills. It is as if the site has been chosen because of the particular views where the sea appears and disappears as you move around the area. This article will deal with the south eastern alignment which is described by Jeremy Butler as Row 1.

Simplified plan showing the relative positions of the stone alignments at Drizzlecombe.  Associated cairns are shown as circles. (Source: Google Earth and Butler, 1994,136).

Row 1
This stone alignment measures 149.5m long including at least 86 slabs. It is unusual in that for part of its length it is formed by a double row of stones, but at either end by a single row of stones. Despite this anomaly there can be no doubting its prehistoric credentials.  Regular readers of the  Heritage Journal will know what is about to happen next, but for those of you who may be new to this series a sequence of Google Earth ground level view images are now going to be presented to illustrate views towards the sea from different spots along the alignment. Fieldwork at several locations has demonstrated that this technique is valid and whilst obviously there will be a need to confirm each “remote sensing” exercise in the field the results to date have indicated that it is a reliable method of rapidly identifying sites with observable links to the sea.

Views from the alignment
A series of images from Google Earth are presented below. The first one represents the view from the cairn at the top of the row, the second from the point where the row changes from a single row to a double row and the third from the terminal pillar.

The view from the top of the alignment provides clearly focussed view of a pair of sea triangles. The larger triangle on the left would also be framed by the cairn at the top of the Shaugh Moor stone alignment.  Sadly the cairn has been very badly damaged and even with powerful binoculars will no longer be visible.  However when fresh someone standing at the top of this alignment could have seen the Shaugh Moor cairn apparently protruding into the sea beyond. Another of Dartmoor’s visual treats and perhaps further evidence for the importance of visual links between the natural and the artificial. 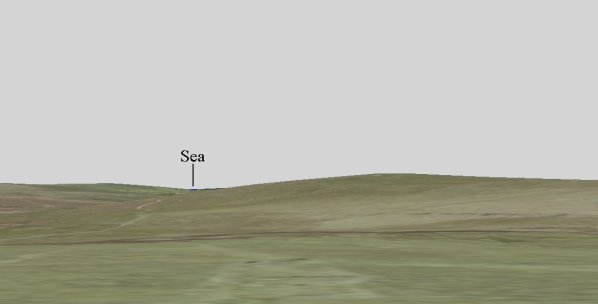 At the point where the double alignment commences the sea disappears behind Shaugh Moor in the background and Eastern Tor in the foreground. As you walk along the row towards this point (a distance of only about 30m) it will look like the sea is being swallowed up by these two hills. In a culture where the boundary between land and water was significant this would have been seen as special and worth denoting by raising stones to mark the place. 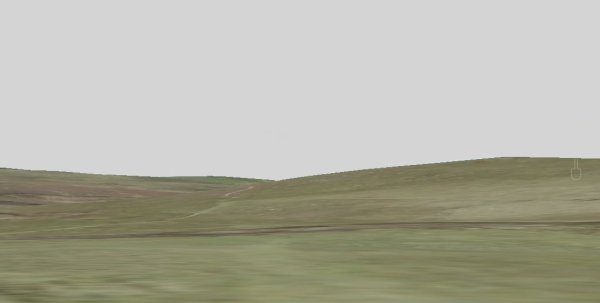 There are no views towards the sea along the entire lower length of the alignment and at the south western end the view is now dominated by Eastern Tor. The journey is complete and its end denoted by a massive granite pillar.

A huge pillar denotes the south western end of the alignment. The row can be seen leading away into the distance.  The second pillar visible in this photograph forms the lower end of Row No. 2. A large cairn known as the Giant’s Basin is visible protruding from behind this large standing stone. 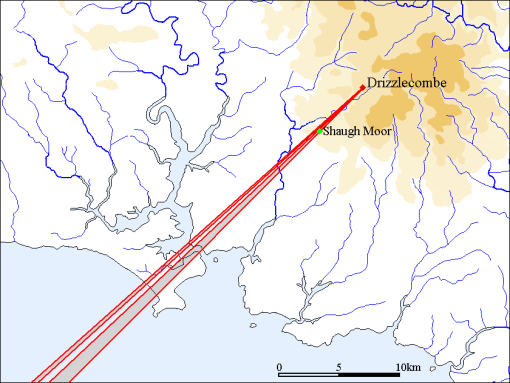 Two very restricted views to the sea are visible from the cairn at the top of the alignment. The eastern one also includes the Shaugh Moor alignment cairn as well as the sea. This might imply some sort of sophisticated planning or could be a coincidence.  The frequency of such special relationships is however worth emphasising and even if a coincidence it would have been something that they were very aware of.  Each sea triangle would have been spectacularly illuminated in turn by the winter sun and may have added a temporal dimension to any ceremonies. The eastern arc should glisten for about 10 minutes at 3.40pm and the western arc for just a few minutes at around 3.55pm. (all times are modern!). I do hope one day to see this for myself.

On 7th September 2019 this row was re-visited and photographs of the sea view taken. The two triangles identified on Google Earth were not identified highlighting the fact that digital viewsheds are far from perfect.  Instead a single sea triangle was identified which shrunk and finally disappeared at SX 59135 66938 as one walked south west along the row.

View from the top of Drizzlecombe Row 1 showing the position of the sea triangle.

Zoomed view of the sea from the top of Drizzlecombe Row 1. The sea is clearly visible with the naked eye and when the sun is glinting on the surface it would be a very obvious visual treat. 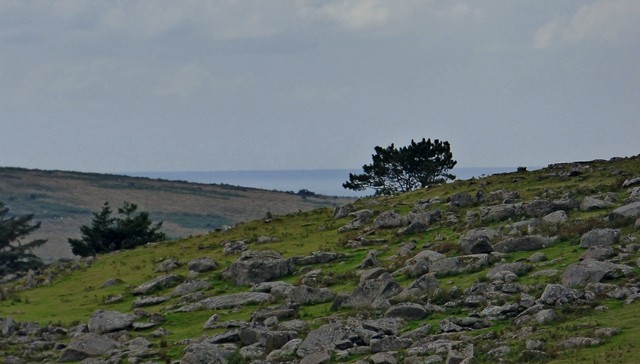 As you walk south west along the row the sea triangle shrinks in size before finally disappearing at SX 59135 66938. This row like many was built across the limit of visibility to the sea.