At least 297 prehistoric stone alignments are recorded in Great Britain. Very few have been dated with any degree of precision and most excavations have revealed no dating evidence whatsoever. Stone alignments are generally accepted as prehistoric by taking into account their context and on occasions it is possible to demonstrate that they are stratigraphically earlier than other prehistoric remains.  Generally those leading from cairns, stone circles or henges are accepted as genuine as are those within rich ritual landscapes. Others are accepted because they are visually similar to other examples and the lack of absolute dating evidence is mostly not seen as an encumbrance.  Identification of stone alignments is made difficult in part because they vary considerably in form and can look like features of more recent date. The uncertainty surrounding the identification of stone alignments will never be satisfactorily overcome and undoubtedly there are examples which have been accepted which are not and others which have been rejected which are. This is inevitable given the nature of the evidence, but does not represent a valid reason for not studying, examining and interpreting this relatively rare group of enigmatic and thought provoking monuments. They have much to tell us and have the potential to provide insights into the lives of the people living in late Neolithic and Early Bronze Age Britain. Utilising the data collected to create this gazetteer it is possible to compare and contrast different sites in different areas. This work has illustrated that there are significant differences between regions but also similarities with certain themes repeating themselves. These different themes will examined in more detail in the research pages of this web resource.

The considerable variation in the form of alignments is perhaps their most significant characteristic and there are also observable differences between the different regions. Some alignments consist of a single row of stones, whilst others have two or more lines of stones.  The shortest alignments are a mere 3m long whilst the longest is over 3000m in length. The number of stones varies between three and 922 and many alignments are composed entirely of small stone below 0.3m in height, whilst others consist entirely of stones standing above 2m high.  Indeed no two stone alignments are identical and whilst they share strong similarities it is the variation in form which is the major characteristic of this monument type. This situation may indicate that the alignments served different functions and whilst they may have shared some purposes it is likely that they served a variety of roles at different times. For this reason it is very unlikely that we are seeking a single interpretation and instead a range of explanations would seem more plausible or indeed logical. This really should come as no surprise as a glance around any town will reveal modern lines of bollards being used to serve different purposes.  They look similar in appearance but often have very different functions – to understanding their role consideration of their context is crucial – the same may be the case for the stone alignments.

Map showing the distribution of stone rows in Great Britain. Click on top right of map to open a full size version permitting direct access to the individual Gazetteer entries.

The distribution of stone alignments is clustered with most examples being found within ten discrete regions.  Some examples lie beyond these regions and are considered under their respective nations. Information on the different regions is available here:

Information on the remaining alignments is available here: 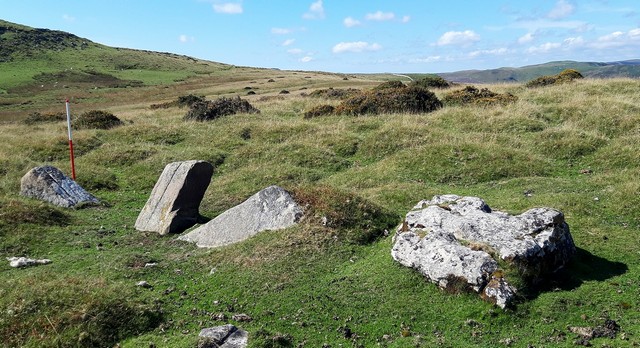