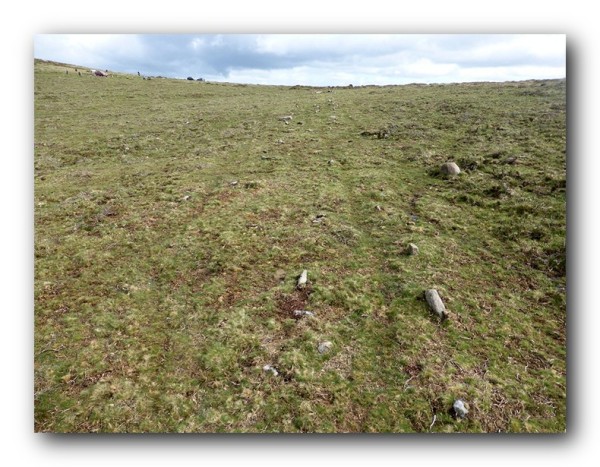 The three roughly parallel lines of stone can be traced up the hill towards the saddle and reveal.

The Yar Tor triple stone alignment includes three roughly parallel lines of stones leading for at least 250m, aligned NNW to SSE up a saddle between Yar Tor and Corndon Tor. Although the row now apparently stops about 70m short of the Money Pit Cairn (SX 6816 7385) there is broad consensus that it once extended as far as this cairn. The stones forming the row are generally relatively small and Jeremy Butler notes that the average height is 0.16m high.  This row has something to tell us about the attitude of the Middle Bronze Age farmers who lived here in later years. Destruction and desecration is certainly not a modern phenomenon.  Over 2,500 years ago a new generation of farmers set about enclosing substantial areas of Dartmoor with fields.  Many of these still survive and illustrate land development on a colossal scale.  The field system laid out over the Yar Tor stone row was truly massive with over 3,000 hectares surviving to this day. The builders of this field system had no use for the Yar Tor alignment and built three lengths of field boundary over it. We can therefore be certain that by the Middle Bronze Age stone alignments were no longer being revered and even by this time their purpose had probably been forgotten. This indicates a significant shift in belief and is likely to reflect radical changes in cultural and ritual practises. Areas previously set aside for ritual activity were now being incorporated into the business of living.  Whatever was originally special about these places had been forgotten or perhaps the needs of the present had rendered them obsolete. They were built by communities, used by the same communities and abandoned when they were no longer required. One need not look any further than the modern church for an analogy.  Long after the Bronze Age fields had been abandoned farmers returned to the area and built new enclosures again incorporating the earlier row in their fields.  The later use of the area has undoubtedly damaged the row but despite its relatively delicate form consisting as it did of mainly small stones it thankfully survived.

Simplified map showing the position of the Yar Tor stone alignment relative to the high ground of Yar Tor, Corndon Tor and Sharp Tor.  As you walk up the row from the north views to the east and west are restricted whilst those to the south are constrained by rising ground.

Simplified plan showing the row leading to the Money Pit Cairn. The Bronze Age reaves (red) and historic fields (green) show no respect for the row and both will have caused damage.

The topographical position of this row has much to offer our current research and the manner in which the row relates to the surrounding landscape is remarkable.  The row sits within a valley between Yar Tor on the west and Corndon Tor on the east and leads upslope from the north to the saddle between the tors. The effect of the disposition of the tors relative to the row is to restrict views to the east and west as you walk along it. It is also unlikely to be a coincidence that the northern end of the row marks the precise point from which restricted views start.  The view westward at this point may also be of significance. An eye catching view of Longaford Tor framed by Laughter Tor is visible and should certainly be described as a visual treat.

This eye-catching view of Longaford Tor is available only from the northern end of the stone alignment.  Longaford Tor is framed perfectly by the nearer Laughter Tor. It seems very unlikely that the myriad of distinctive visual relationships like this can all be coincidences. Furthermore it is possible at the summer solstice sun may set behind the tor. Certainly something worth checking out.

The shift in the alignment at this point is obvious. Like most Dartmoor stone rows this one is not absolutely straight.

The Money Pit Cairn would have originally formed the upper end of the row.

As you approach the Money Pit Cairn on the route of the row Sharp Tor slowly emerges from behind the cairn.

As you reach the cairn Sharp Tor looks as if it is sitting on top of the cairn. This visual trick and treat may of course have had considerable significance for the row builders. We have seen several reveals like this already but this one is particularly special enhanced as it is by the appearance of the sea on the distant horizon further to the east. Most artificial structures both past and present are built where they are for particular reasons and it would therefore be most surprising if stone alignments were not sited to take cognisance of their surroundings.  Here the visual treats are very obvious but the chances are that all the rows were built to acknowledge their surroundings.  Their linear form suggests that special routes were being denoted. It was clearly important that a particular path was followed and that the reveal was an important part of the ritual. The repeating pattern of links between the landscape and alignments provides a powerful indication that the rows played some part in connecting these people with their world.

The juxtaposition of the Money Pit Cairn, Yar Tor stone alignment and Sharp Tor is just too perfect to be a coincidence.

Views from the alignment

Four images derived from Google Earth are presented below to illustrate the character of the reveal. As you walk up the hill towards the saddle views to the west and east are restricted by the neighbouring tors and the view to the south by the saddle itself. This is the case for much of the length of the row which of course emphasises the reveal when it happens. 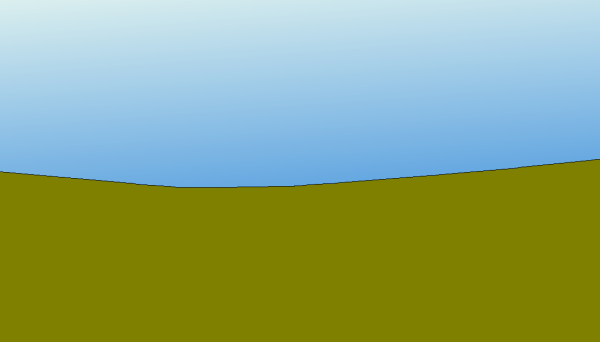 From the bottom of the row the view southward is restricted by the saddle between Corndon and Yar Tors.

After 100m the view remains restricted.

Finally a sea triangle appears on the south eastern horizon 5m from the Money Pit Cairn. 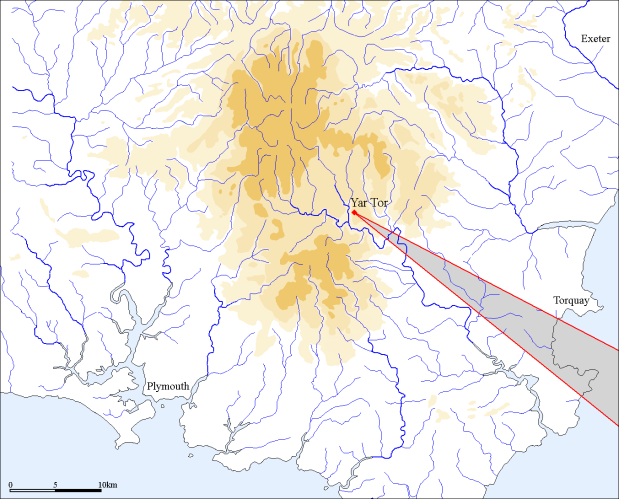 Map showing the arc of visibility from the upper (southern) end of the alignment.  It might be significant that the rising sun at the mid-winter solstice appears out of the sea triangle. Either end of the row appears to be closely related to celestial events – the top in the winter and the bottom in the summer.  A convincing body of evidence is developing that there is a correlation between the rows and celestial events although not in a manner that had been envisaged when this research began. The links with the sea are undoubtedly important but they are clearly only part of the picture and it is the complex visual relationships between the sky, water and land that seem to be being celebrated, acknowledged and sign-posted by the rows.  Each site is unique in form and location but the common thread that is developing is that they were each built to provide a special route between places with extra-ordinary visual relationships with the landscape. The stone alignment at Yar Tor is particularly informative and I would like to thank the Dartmoor Preservation Association for their recent clearance work which has revealed this extraordinary alignment.