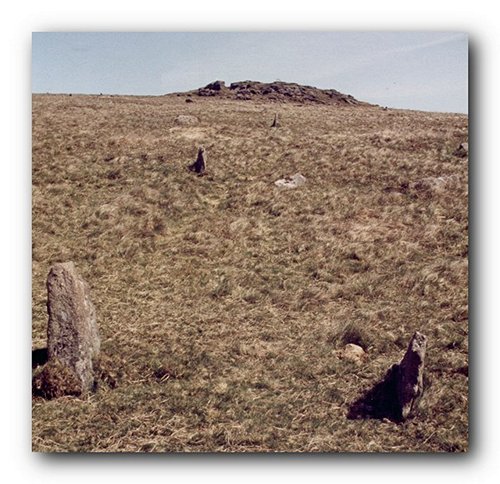 A double stone row measuring 95.4m long, including at least 36 mainly small with some medium-sized stones situated on a south facing slope. The row is orientated NNE to SSW and has both landscape and sea view reveals and links. 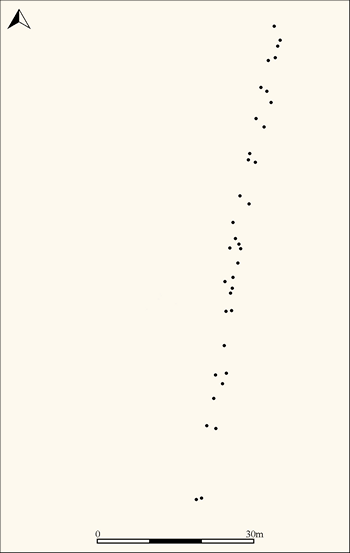 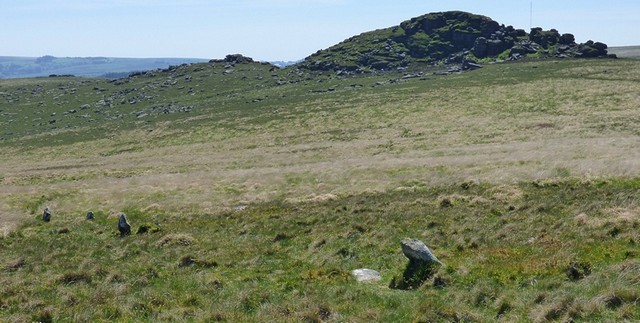 View from north east with Longaford Tor in the background.

Looking south along the row. 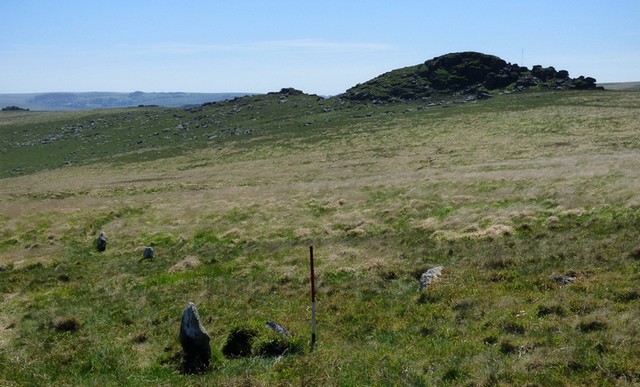 A double row. View from the north east (Scale 1m). 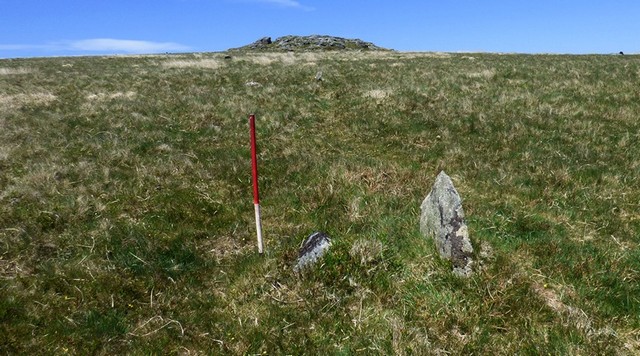 A pair of stones forming either side of the row. View from south looking towards Higher White Tor on the skyline (Scale 1m).

The upper length of the row. View from the north east. 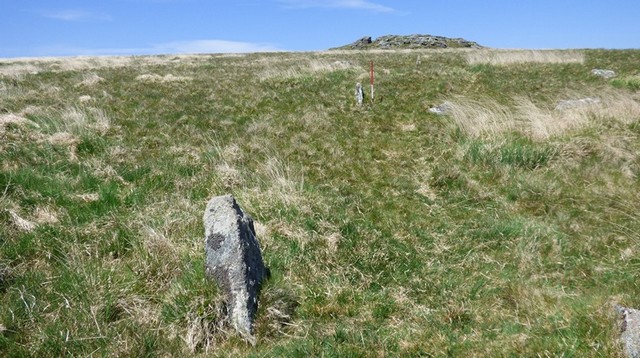 Looking north along the row.  The row is aligned on Higher White Tor, but stops a long way short (Scale 1m).

The row leading up the hillside towards Higher White Tor. View from south.

There are extensive views from the stone row, but those to the west and south west are worth looking at. At the bottom of the row the nearby Longaford Tor together with a pronounced notch are clearly visible, whilst the Beardown Tors are partially blocked by the near hill slope. Most significantly only the very top of Great Mis Tor is visible. The end of the row denotes the limit of visibility. Visual relationships of this type are a common feature of stone rows and this cumulative evidence strongly suggests that many rows were carefully positioned to take cognisance of this sort of visual inter-relationship.

Great Mis Tor is only just visible from the bottom (southern end) of the row. The precision of this relationship provides further compelling evidence for visual links between stone rows and the landscapes in which they were erected.

As one walks up along the row the Beardown Tors and Great Mis Tor slowly emerge from behind the near hill slope and at this point Lydford Tor suddenly appears.

The tors are now clearly visible from this point on the row.

At this point for the first time land becomes visible within the Longaford Tor notch. On particularly clear days a view of the distant sea may also appear within this notch.

At the top of the row North Hessary Tor appears from behind Longaford Tor. Both ends of the row are therefore denoted by limits of visibility to two separate tors. At the bottom Great Mis Tor is at the limit of visibility whilst at the top it is North Hessary Tor. The precision of these landscape reveals makes them unlikely to be a coincidence and it is more likely that the row was positioned carefully to ensure that these particular visual “treats” were incorporated.  The emergence of the Beardown Tors and the Lydford Tor reveal may also have been of significance to the row builders.

From the top of the row the Longaford Tor notch is now filled with land, possibly topped by a slither of sea.

Car parking is available at SX 63757 77614. From here head a short distance along the B3212 towards Postbridge before crossing the road to join the Lychway. Follow the Lychway to SX 61805 77646 and then head towards Higher White Tor.