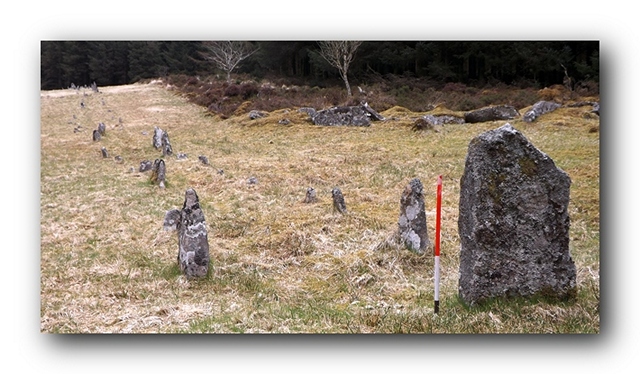 A double stone row measuring 125m long, including at least 133 mainly small with some medium and large-sized stones situated in a forestry clearing on a north west facing slope. The row is orientated ENE to WSW and was restored in the 1890’s. There is a kerbed cairn at the ENE end and a blocking stone at the lower WSW end. A later reave cuts across the row and a stone round house built nearby was presumably constructed at the same time. 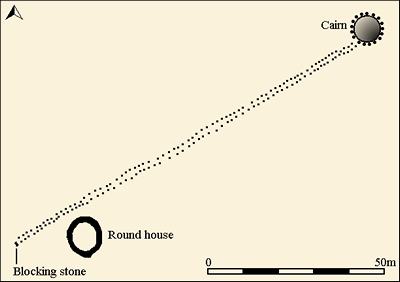 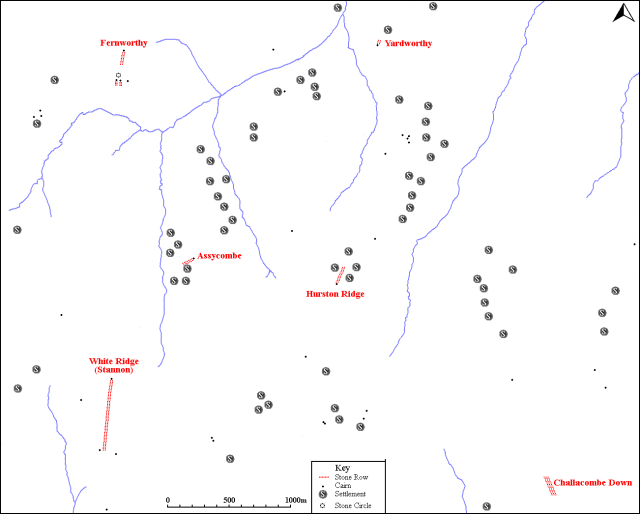 Map showing the position of Assycombe, other stone rows and sites.

Category: Plausible.  No doubts have been expressed regarding the prehistoric interpretation of this row. 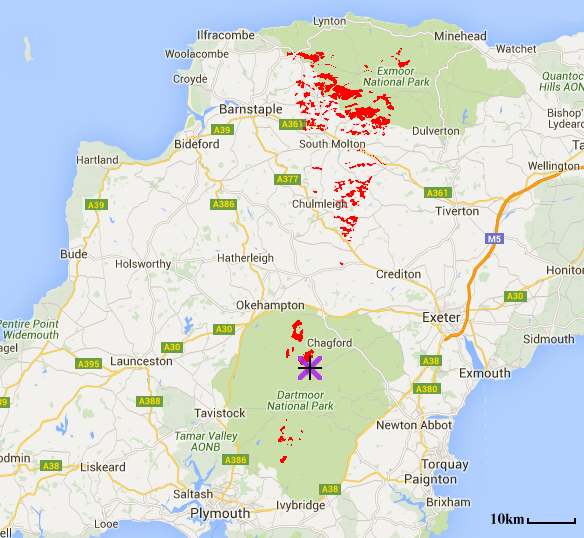 Viewshed (red) from the top (east) of the Assycombe stone row. Source: www.heywhatsthat.com

Despite its valley location, the top of the stone row has views extending for up to 19km to the SSW with the slopes above Shavercombe representing the limit of visibility. Perhaps more surprisingly are the extensive views towards Exmoor with the limit of visibility being the high ground of Lucott Moor. On Dartmoor it may be significant that the large prominent cairns at Eylesbarrow (SX 59957 68630) appear on the distant skyline. Closer to home the upper length of the White Ridge stone row and two of the Fernworthy stone rows (Fernworthy 2 and Fernworthy 3) would have been visible before the area was afforested. Perhaps of more interest is the fact that the Fernworthy 1 row stands in a tiny “blind spot” situated behind a slight rise in the ground.  The north eastern limit of visibility is denoted by the prominent Kestor whilst the southern rows on Shoveldown would also have been visible. Views to the west are very restricted but the upper parts of Hangingstone Hill and its two cairns would have been visible. To the north the cairns on Cosdon Beacon would have been clearly visible on the skyline whilst the triple row on the eastern slopes may have been discernible under certain lighting conditions. On Exmoor many of the large barrows situated along the ridges may have been clearly visible. 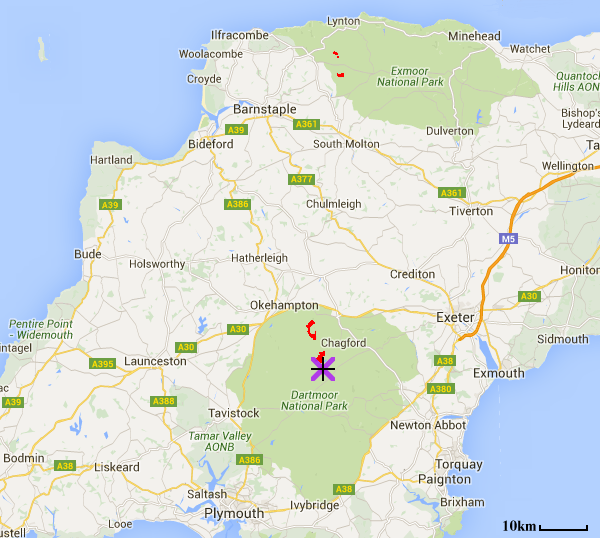 Viewshed (red) from the bottom (west) of the Assycombe stone row. Source: www.heywhatsthat.com

The viewshed from the bottom of the stone row is very much more limited. Views to the south are almost non-existent, and indeed on Dartmoor only the cairns on Cosdon Beacon, the Cosdon stone row and a small part of the Shoveldown rows would have been visible. On Exmoor only a tiny bit of the moor is now visible, although interestingly this would have included the Chapman Barrows at SS 69692 43478. The lower end of the row is at the furthest limit of visibility for Exmoor. If one had walked a few metres further down slope none of Exmoor would have been seen. This could certainly be part of an explanation for the positioning of the lower end.

Essentially all the other features visible from the top would have been revealed (prior to afforestation) as you walk eastwards up the row.  The appearance of these significant places on the journey along the row is beyond doubt, but was it intentional and therefore its “raison d’etre” or is it simply a coincidence? Powerful cumulative evidence supports the significance of visual relationships within the ritual setting of monuments within the Neolithic/Early Bronze Age. This combined with the considerable evidence for similar tangible visual links between the rows and the landscape in which they were constructed represents a strong indication of the context in which the rows were built, even if we cannot sadly appreciate the precise details of the ceremonies or rituals we can be increasingly confident that landscape and a journey which revealed distant landmarks played some part. 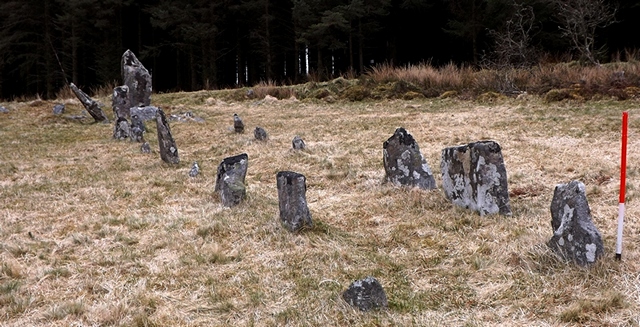 Upper length of the stone row. View from west (Scale 1m). Click on image to enlarge. 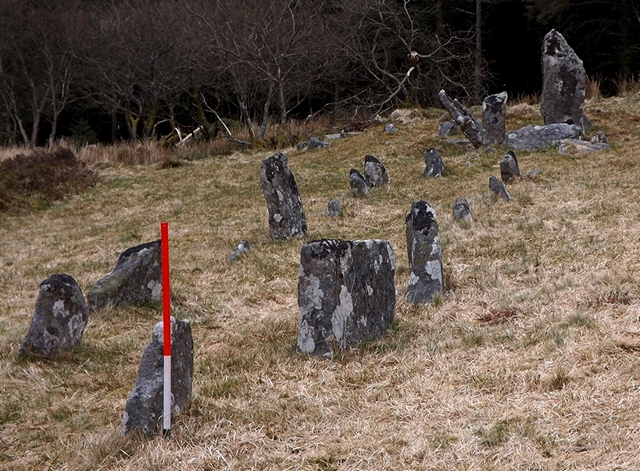 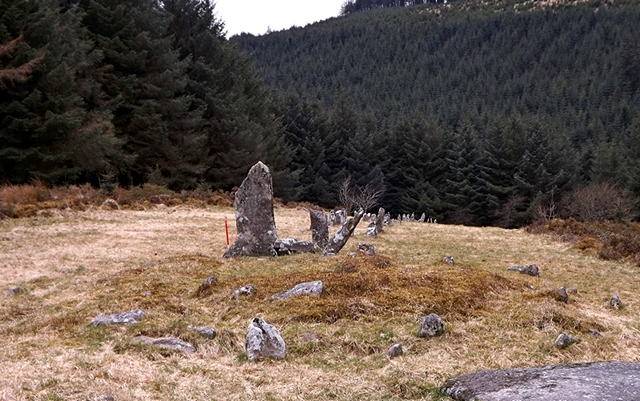 Kerbed cairn at the top of the row. View from the north east (Scale 1m). 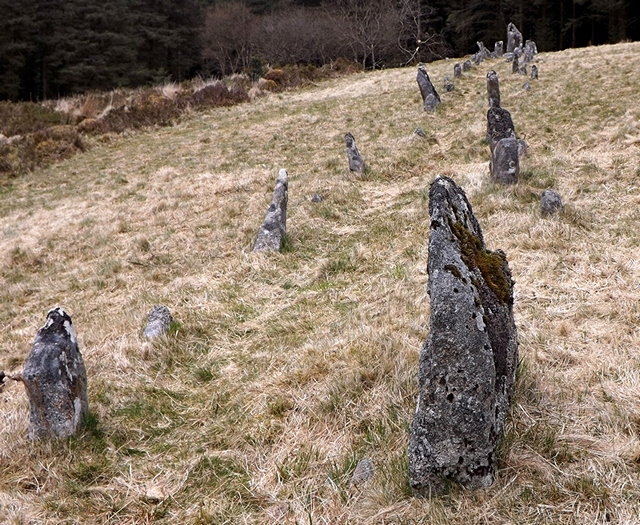 Looking uphill along the row. View from the south west. Click on image to enlarge. 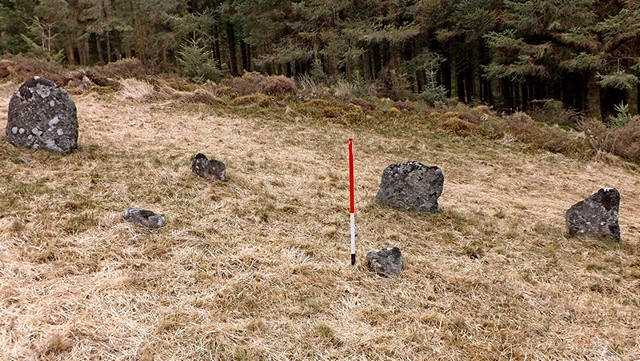 In common with many prehistoric alignments, the row is composed of stones of very different sizes. View from the north (Scale 1m). 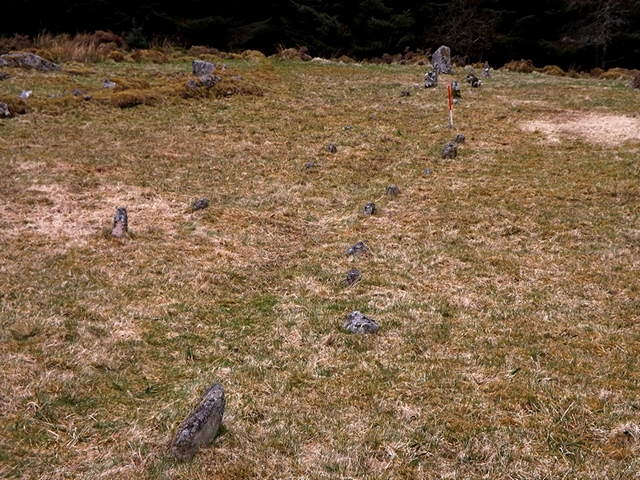 In common with many prehistoric stone alignments this row is sinuous in form. 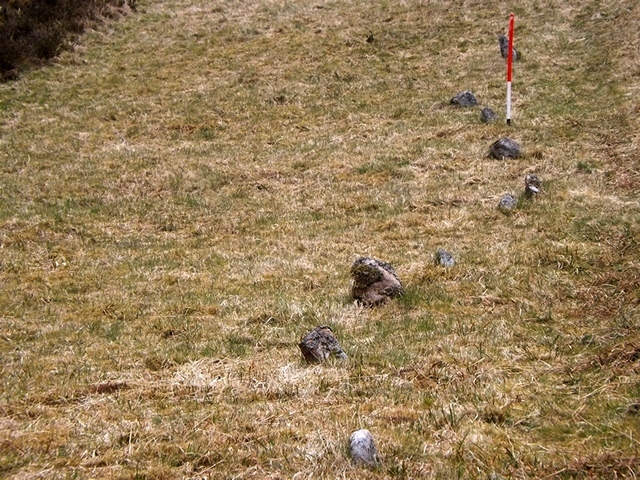 A sinuous form should never be seen as an obstacle to a prehistoric interpretation. 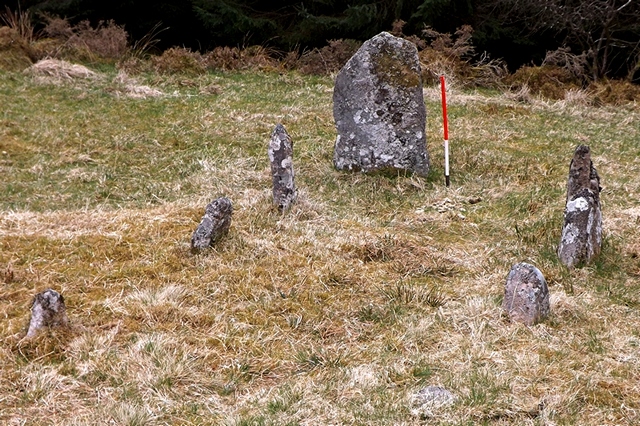 Blocking stone at the lower south western end of the row. It is very likely that another once stood to the right of the ranging rod. 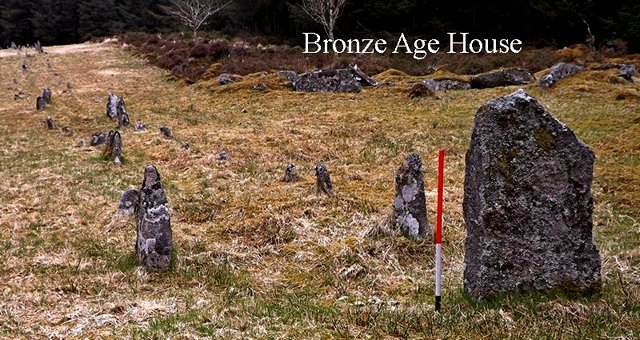 Looking north east along the row. It is remarkable that the row has survived so well given its position next to a later Bronze Age house.

Burl, A., 1993, From Carnac to Callanish – The prehistoric rows and avenues of Britain, Ireland and Brittany, Yale University Press, New York and London, pg. 214.