Most of the stones in this alignment protrude only slightly above the ground surface.

On a spur of high ground leading north west from Sharpitor are a pair of adjacent stone alignments. The northern row (Sharpitor NW 1) is of the double variety and its near neighbour (Sharpitor NW 2) is a single row.  Both rows stand immediately next to the public highway (B3212) leading from Yelverton to Princetown next to a car park beside Goatstone Pool. They have seen considerable damage but despite this their form is still discernible. The single row includes at least thirty stones forming an 82.5m long row standing between 0.1m and 0.4m high leading a low spread mound at its western end. Unsurprisingly a walk westwards along this row provides nearly identical views and reveals to those experienced at the nearby double row although in this case the row is not aligned on South Hessary Tor, but instead point directly at the cairns at the top of the Hart Tor stone rows.

Idealised sketch plan of the Sharpitor stone alignments showing what they may once have looked like based on Google Earth and field observations.

View from the north eastern end of the row looking south westward. 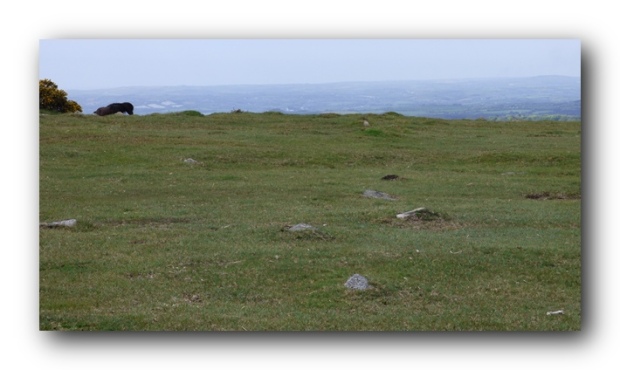 Row leading towards the low cairn at the south western end. View from the north east.

Views from the alignment

The character of the reveal achieved by walking south westward along the row is very similar to that experienced along the adjacent double row.  So instead this time the view revealed as you walk north eastwards is examined.  A case is being built that the alignments were built to denote movement and that a megalithic character was not necessary.  Indeed this row could have been built by a single family group in an afternoon.  The stones were capable of being easily handled but this does not detract from their importance or the information they have to tell us. In this instance as is probably the case with many of the rows other visual treats are on offer, but the most obvious is the relationship between the row and the stone rows at Hart Tor. This row points directly towards the Hart Tor rows which are partly revealed as you walk up the hill from the cairn at the south western end. The Hart Tor rows are framed and partly obscured by the lower slopes of Leeden Tor which effectively block the view to the lower parts of both rows.  It is anticipated that further work will reveal more examples of this type of particular precise visual inter-relationship and  these taken together with the links to the sea will allow analysis of patterns and convincingly demonstrate how these monuments were used even if we never understand why. Each row is unique in appearance and it should therefore not come as a surprise to find that they were each placed very carefully within the landscape to take full advantage of a myriad of different visual treats.

View looking north east along the row from the cairn at the south west end. The views in this direction are restricted by the rising ground leading to the blind summit.

As you walk up the hill the stone rows at Har Tor appear framed by the near ground and the lower slopes of Leeden Tor. The fact that this row is aligned on these rows and they are revealed as you proceed along the row seems deliberate particularly when one considers that the slightest difference in the orientation of the row would mean that this visual treat would not happen.

Finally at the end of this row the Hart Tor rows are peeking out behind the lower slopes of Leeden Tor in the foreground.