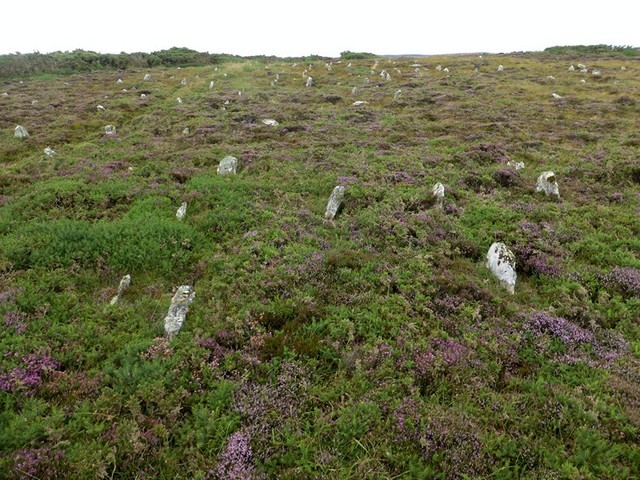 Hill O’ Many Stanes, Caithness, is the best preserved and most dramatic of the multiple stone rows.

Twenty seven multiple rows are currently recorded in Great Britain (Figure 1). An interactive map providing access to details on these rows is available here.  They all include at least four lines of stones. Most are “fan-shaped” in form (Figure 2) although some consist of parallel rows of stones (Figure 3).  The great majority (22) are in Northern Scotland  and the remainder are on Exmoor and Dartmoor. The obvious concentration of rows of this type in Northern Scotland can be no coincidence and what is perhaps more remarkable is that small numbers have been found elsewhere. The distinctive “fan-shape” of the Northern Scotland rows does not with the exception of the possible row at Yellowmead on Dartmoor and Pig Hill on Exmoor to have been a characteristic of the others in Britain.  This might suggest that these rows should be more properly considered as a different type of site to the others and to have a localised distribution, whilst the others might be more properly seen as complex settings rather than rows. These rows are certainly very different in form to the others and consist predominately of small and medium sized stones. Three of the multiple rows consist only of small sized stones. Twenty-two of the rows include both small and medium sized stones and one (Hill O’ Many Stanes) includes a few large stones. Multiple stone rows were therefore not intended to be grand architectural statements and are often difficult to trace on the heather covered hillsides on which most are found. The choice of small stones is likely to have been deliberate as large slabs were readily available in the vicinity but never used.  The Hill O’ Many Stanes has the most rows with 22 separate lines having been identified. The average number of rows is 8 and a total of 211 separate lines of stones have been recorded. The longest multiple row is Corringdon Ball, South on Dartmoor which includes at least seven separate rows extending up to 178m.  The average length is 40m and the shortest row is the possible one at Learable Hill 3 which is only 8m long.  A total 1663 stones have been recorded at multiple stone rows, but this is likely to represent a significant understatement as many stones are likely to be buried beneath the turf.

Figure 1 Distribution of multiple rows. There is an obvious cluster in Northern Scotland. Clicking on the map will open an interactive version permitting access to individual gazetteer entries.

Figure 2 The Hill O’ Many Stanes has a distinctive “fan-shaped” plan form. (Source: survey by H. Dryden 1871). Original held by the Society of Antiquaries of Scotland and an online version is available here at Canmore.

Much of the recent work on the multiple rows in Northern Scotland has been carried out by Myatt and Freer. Most of their work is available online (See References). A significant cluster of rows survives in the area south of Wick where 9 multiple rows can be found in close proximity. It is unlikely to be a coincidence that this area also hosts a significant concentration of chambered cairns. The relationship between the chambered cairns and the stone rows may be significant and worth examining.  One really cannot over-emphasize the considerable difference between the Northern Scottish multiple rows and the megalithic rows of Central Scotland and Argyll and Isles. It is hard to believe that they could have served the same function so great is the difference in their form. With the possible exceptions of the rows at Yellowmead and Pig Hill “fan-shaped” rows are confined to Northern Scotland and this suggests that the society that built and used them was different in at least once crucial aspect to the people who built the other types of row.

Figure 4 Very little of the Yellowmead multiple row on Dartmoor survives and could be the product of over enthusiastic restoration. The focussed distribution is not one shared by any of the other types of stone row.

Figure 6 The Garrywhin multiple rows stand near the Cairn O’ Get chambered cairn.

Multiple stone rows are mainly “fan-shaped”, found in Northern Scotland and always include small stones. They may have more in common with the Exmoor stone settings than the single, double and triple stone rows. They have traditionally been seen as a form of row and are therefore included in this website, it is however almost certain that they would have served a different purpose to the other rows.