View from the west of the Trehudreth Downs stone setting (Scale 1m). 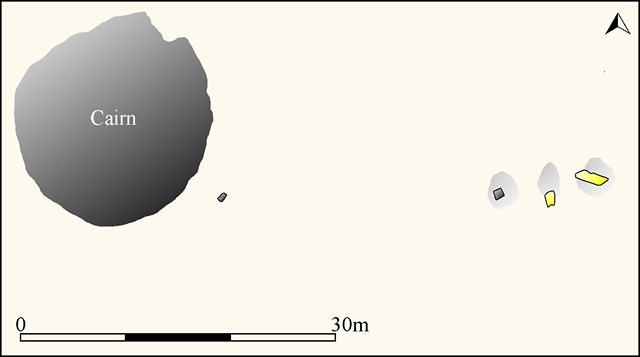 Plan of the stone setting, cairn and standing stone on Trehudreth Downs. Source: Survey at 1:500 by Gordon Fisher, Janet Daynes and Sandy Gerrard

Category: Uncertain. Although described by the Ordnance Survey as a possible stone alignment there is consensus that it is more likely to represent the remains of a stone setting. Whilst the possibility still exists that it may be a stone row there are two good reasons for doubting this interpretation. First, the stones are not in a straight line and whilst this regularly happens in the longer rows it is not a characteristic of the short rows composed of large stones.  Second, there are no known short rows composed of only large stones in the South West of England. Taken together, these reasons for doubting the interpretation of this site as a stone row are compelling. The only added complication is a fourth stone situated close to the cairn which could be interpreted as forming part of an alignment of four stones leading from the cairn. This stone is however much smaller than the other three and is not aligned towards the other three stones, the gap between this stone and the others is considerable and its proximity to the cairn suggests that it is more likely be more directly associated with the cairn than the other stones.  Whilst a stone row interpretation is uncertain, further work may resolve this issue, although we can be certain that this is an important prehistoric site. 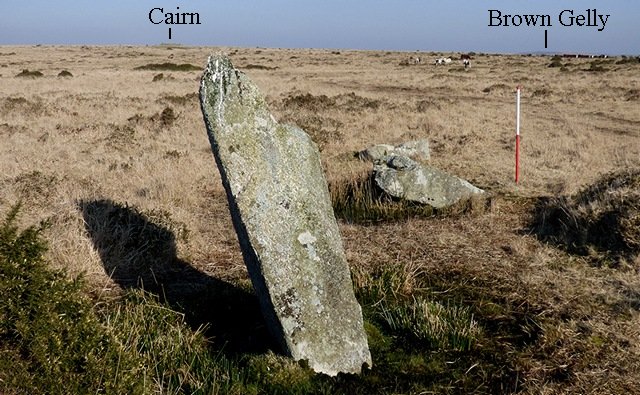 Looking east along the stone setting. It may be significant that Brown Gelly is prominent on the skyline. Indeed it is likely that the hill with its cairns would have been framed by the stones when they were all standing. Closer to home a cairn at SX 12995 72947 is also obvious on the skyline (Scale 1m). 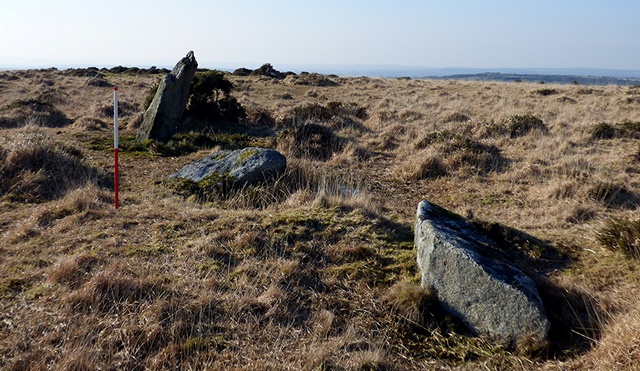 The three large stones and cairn beyond. View from the east (Scale 1m). The nearest stone measures 1.83m long, 0.64m wide and stands up to 0.52m high. The middle stone is 1.68m long, 0.57m wide and 0.66m high.  This stone is not completely recumbent, but leans very heavily to the north indicating that its socket was at the southern end of the stone.  The third stone stands 1.56m high and is 0.43m by 0.37m at its base.

The three stones. View from the south (Scale 1m).

Brown Gelly forms a visual focus for these stones. The stone beside the ranging rod is situated close to the cairn and measures 0.87m long by 0.38m wide and 0.52m high. View from the west (Scale 1m). 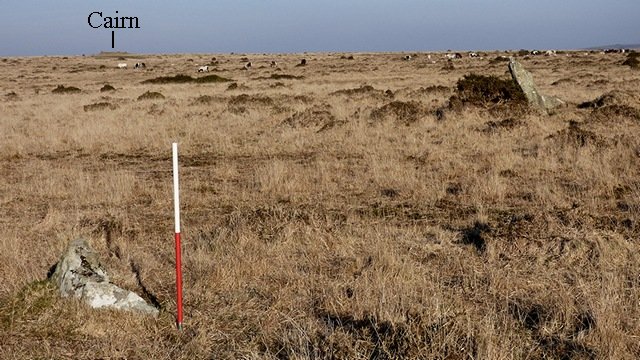 The nearby cairn at SX 12995 72947 and Brown Gelly are both at the limit of visibility from this setting of stones. View from south west (Scale 1m).

Help with the fieldwork was provided by Janet Daynes and Gordon Fisher.