A possible single stone row measuring 9.7m long, including three large upright orthostats situated on a gentle south west facing slope. The northern stone stands 0.89m high, the central one is 1.54m high and the southern one is 1.52m tall. The row is orientated north west to south east. The doubts regarding identification exist because it is possible that this represents the remnants of a mutilated stone circle and because of its proximity to the road.

Plan of Borve stone row. Survey by Sandy Gerrard at 1:100. The grey stones are upright and the yellow ones recumbent. The recumbent stones are probably secondary and represent later historic dumping.

Category: Possible. This monument is described as a stone circle by Canmore, but Burl includes it within his stone alignment gazetteer. The site certainly has the appearance of a stone row, but whether this is the result of partial survival of a stone circle or some other form of structure or because it is a stone row is not known. On balance a stone row interpretation seems possible.

View from the east (Scale 1m).

Looking eastward along the row. It is clear from this angle that the row is not perfectly straight (Scale 1m).

View from the north east. The western stone is significantly smaller than the other two (Scale 1m). 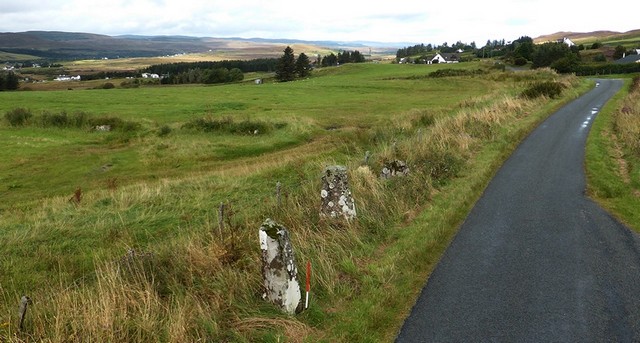 View from above and east (Scale 1m).

View from above and north west. 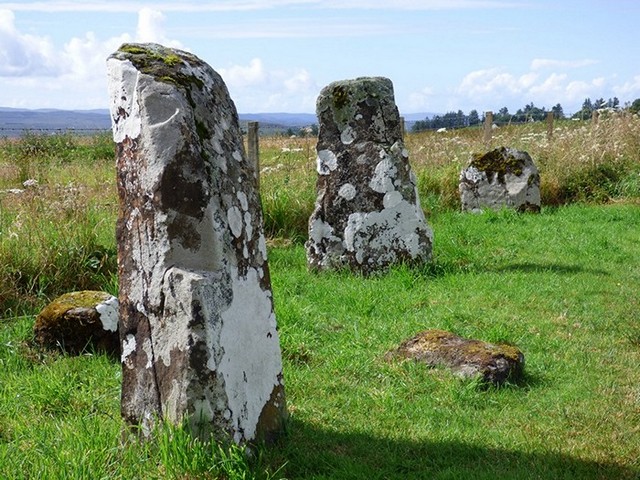 Looking north west along the row.

This stone row is situated next to the public highway and parking is available adjacent to it.

Burl, A., 1993, From Carnac to Callanish – The prehistoric rows and avenues of Britain, Ireland and Brittany, Yale University Press, New York and London, pg. 224.