A possible single stone row measuring at least 120m long, including three large-sized orthostats situated at the upper end of a small valley. The stones measure between 2m and 1m high and sit beside the public highway. The row is orientated ENE to WSW and stands in an area with broadly contemporary standing stone, cairns and another stone row. Proximity of the road introduces an element of uncertainty regarding identification.

Category: Possible.  The fact that only three stones survive, the considerable size of the gap between the two eastern stones and the western one and its position next to a road means that it is not possible to be certain that this is a stone row. However, a stone row interpretation best fits the surviving evidence and the setting is certainly typical for this type of monument.

This stone row is of Type S8. Information on this form of stone row and other rows of this type is available here.

The pair of stones at the eastern end of the row. View from west.

The eastern pair. View from the north.

The eastern end of the row.

The western stone. The eastern stones are hidden behind the rising ground. Other stones would have been removed by the road. View from west. 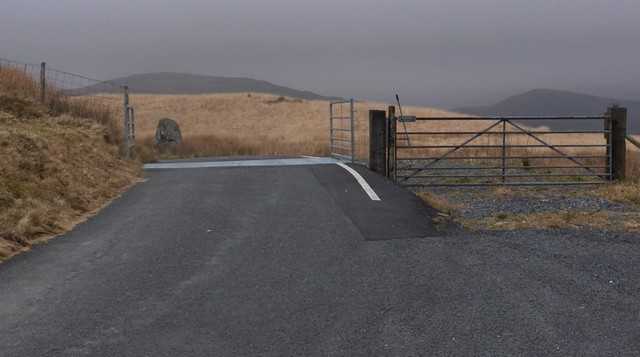 Walking eastward along the row the end stones are revealed. The construction of the road has altered the local topography and led to the destruction of much of the row.

This row is situated next to the public highway and car parking is available next to the eastern stones.