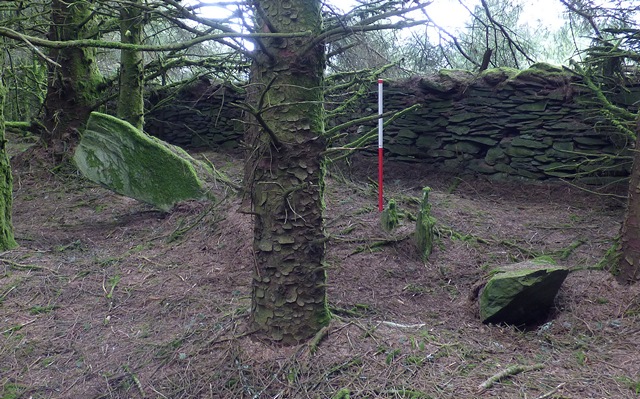 View from the south east.

A probable single stone row measuring 5.8m long, including at least 4 medium and large-sized stones originally standing up to 1.4m high, situated near the top of a prominent ridge. The row is orientated west to east and originally had a sea view which is now obscured by forestry. 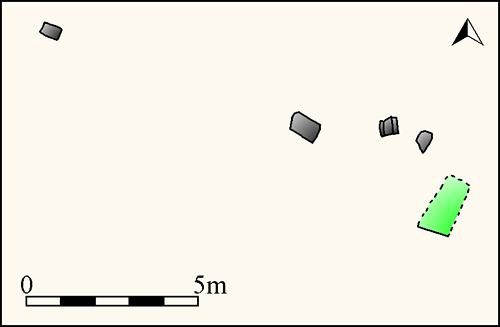 Category: Probable. Whilst in its current form this site looks like a stone row the possibility should be acknowledged that it may be another form of structure which has seen considerable alteration/damage.  On the basis of the available evidence a prehistoric row interpretation seems most probable.

This stone row is of Type S3. Information on this form of stone row and other rows of this type is available here. 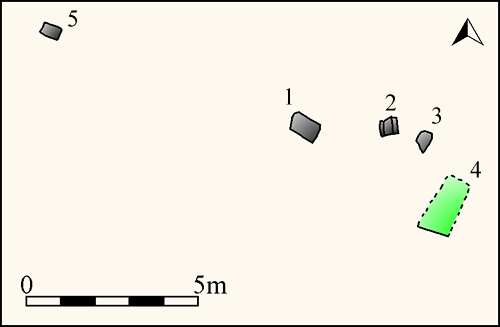 Plan showing the position of the numbered stones. 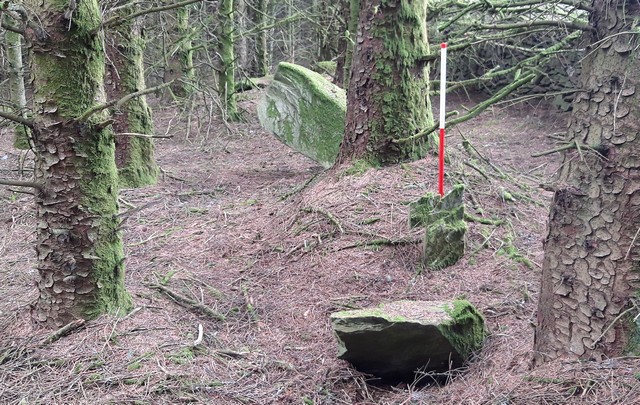 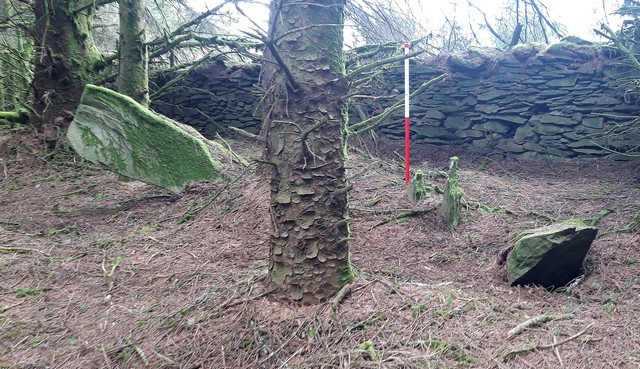 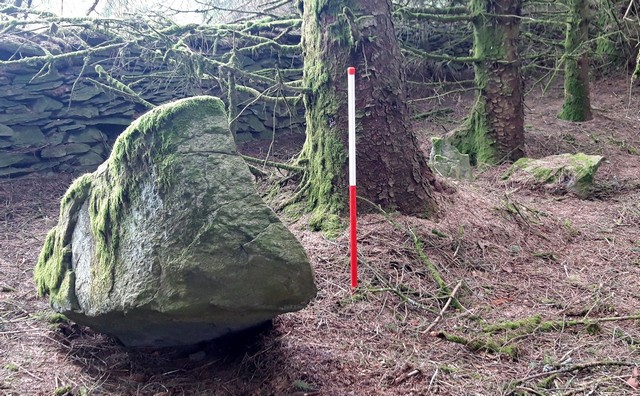 Stone 1 in the foreground and others beyond. View from WSW (Scale 1m). 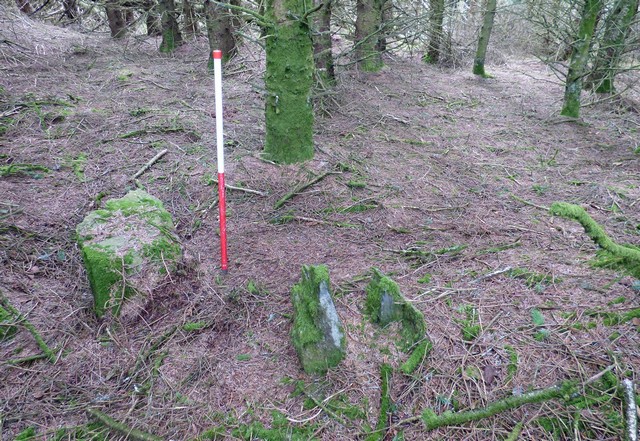 Stone 2 (right of ranging rod) has been fractured into two stumps and now measures 0.4m long by 0.37m wide. The western part of the stone measures 0.16m high and the eastern fragment 0.46m high. 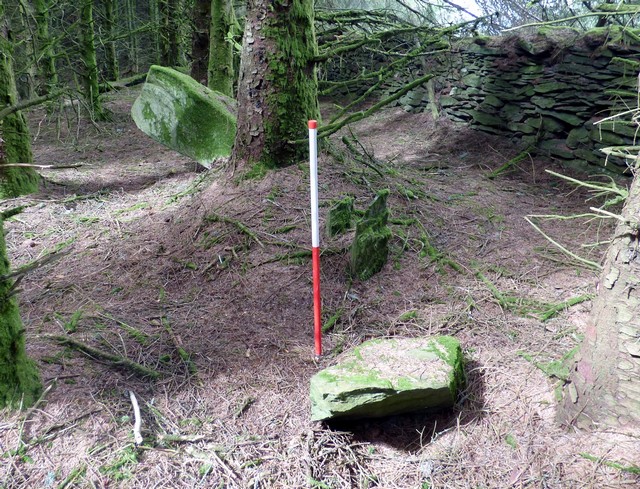 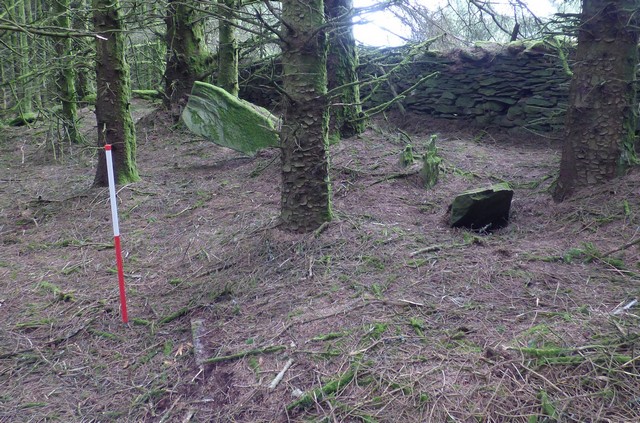 Stone 4 (right of the ranging rod) is largely hidden below the soil, although its outline was determined by prodding. This stone measures 1.60m long by 0.47m wide and only part of it barely protrudes above the ground surface.This stone probably fell southward. View from south east (Scale 1m). 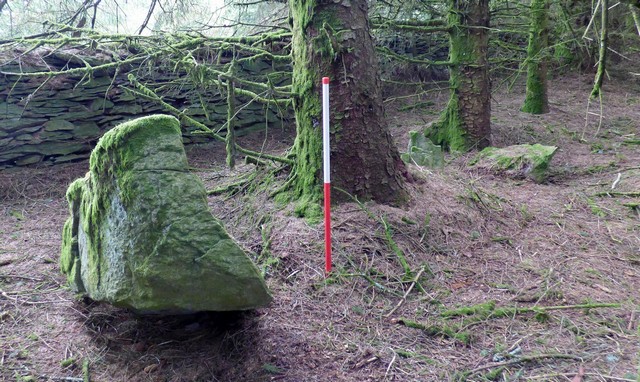 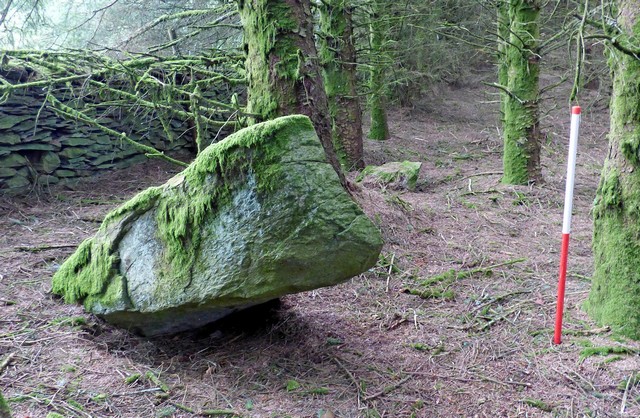 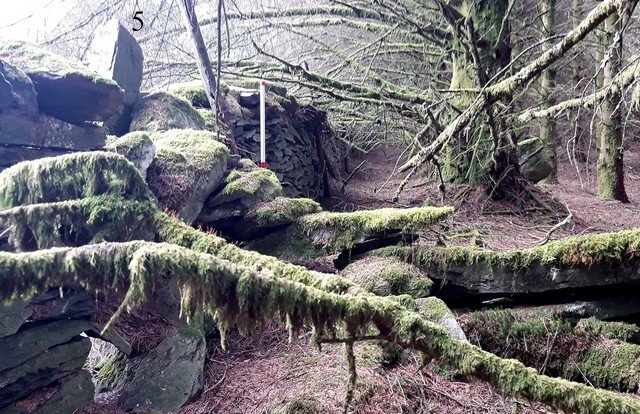 Stone 5 is a large orthostate measuring 0.50m long by 0.20m wide and standing up to 1.68m high.  It appears to be leaning against the drystone wall and is probably not very deeply set into the ground.  It is not on the same alignment as the other stones and this combined with its position at a wall junction suggests that it is much more likely to have been erected at the same time as the wall.  It is perhaps significant that the wall leading south is composed of similar sized slabs which have been laid flat. View from west (Scale 1m). 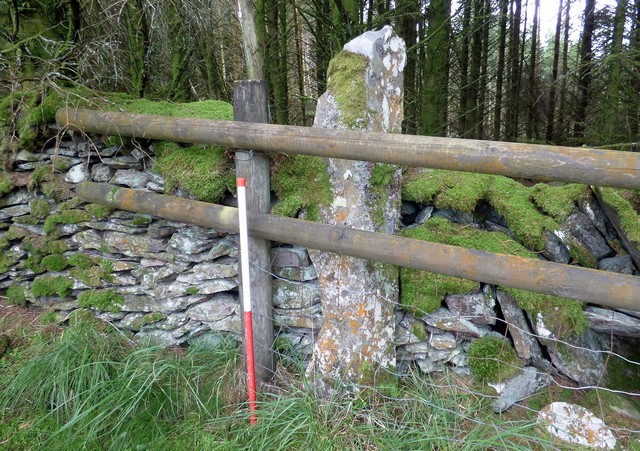 Stone 5 is very unlikely to have formed part of the stone row. View from north (Scale 1m).

This is not an easy row to get to.  Limited parking is available at SN 70705 96376. From here walk along the track past Brwyno Canol into the forest.  The tracks within the forest are overgrown and it is recommended that a GPS is used to help navigation towards the row.

I would like to thank Sophie Smith for considerable help with the pre-survey research, the survey itself and on-site discussions.