A double stone row measuring 582m long, including at least 167 mainly small-sized stones together with some medium and large-sized stones situated on a south west facing slope with a series of landscape reveals. The row is orientated north to south, there is a cairn at the northern end and a blocking stone at the lower southern end. There are several other cairns and prehistoric settlements in the vicinity.

Map showing the position of White Ridge (Stannon), other stone rows and sites.

Category: Plausible. No doubts have been expressed regarding the prehistoric interpretation of this row which recent survey work has indicated extends further to the south than was previously thought.

Looking north along the most visually impressive length of the row (Scale 1m).

Looking south along the most visually impressive length of the row (Scale 1m).

Most of the row consists of very small stones, but along this length the slabs are of medium size. It is clear that the row has not been aligned on the prominent Bellever Tor. 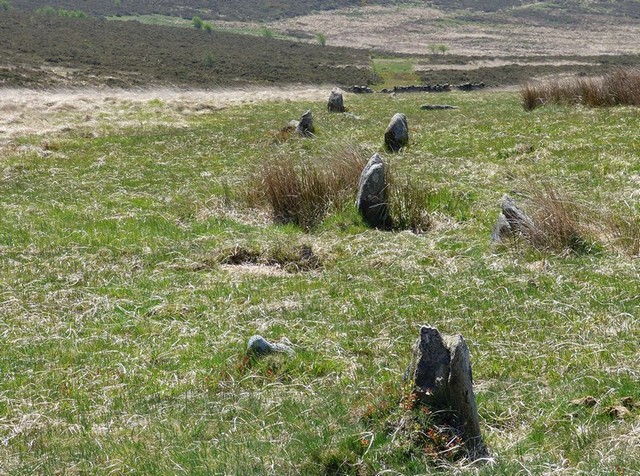 The double form of the row is obvious along this short length.

View from the top (north) of the row with the much mutilated cairn in the foreground. From the top of the row the lower end is hidden and only appears as you walk down along the row.

The lower length of the row is highlighted by the band of vegetation clearance. View from the north. 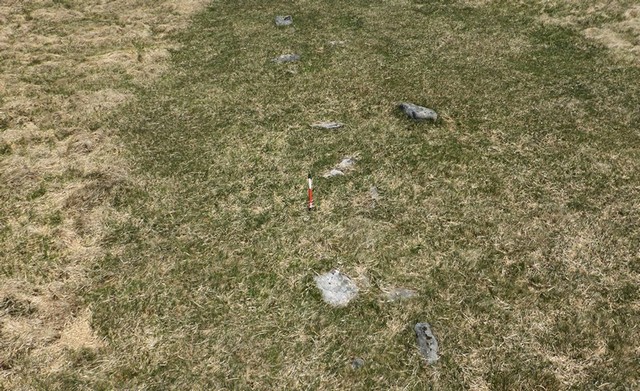 Along this length the stones are now all recumbent. View from the south (Scale 1m). 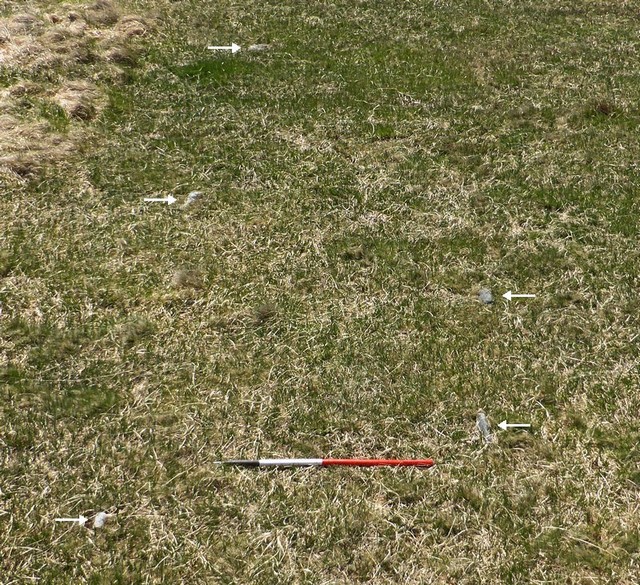 Tiny stones highlighted with white arrows. Many rows include stones which could have been easily placed by an individual in a matter of minutes. These stones were clearly not intended to make an architectural statement and would have only been visible to those standing adjacent to the row (Scale 1m). 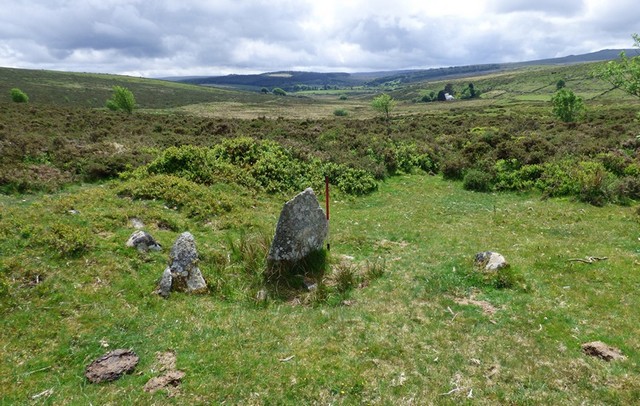 The southern end of the row. The tall stones measures 0.9m high and is probably a blocking stone. View from the north (Scale 1m). 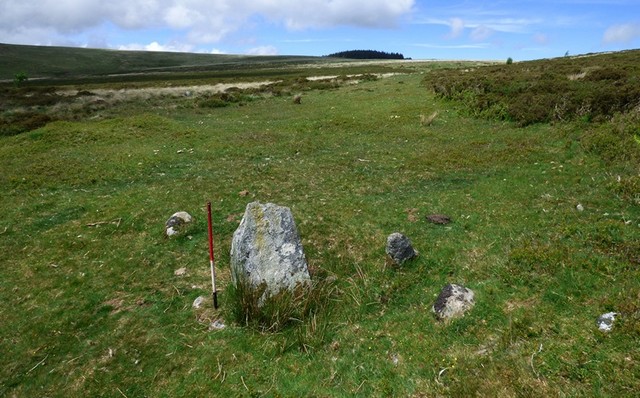 Looking north along the row with the blocking stone in the fore ground (Scale 1m).

The row is composed mainly of small stones that barely protrude through the surface. View from south (Scale 1m).

One of the larger stones. View from south (1m).

Until recently much of this stone row was hidden by dense gorse. View from south (Scale 1m).

In places there is a very small gap between the two lines of stones. View from north (Scale 1m). 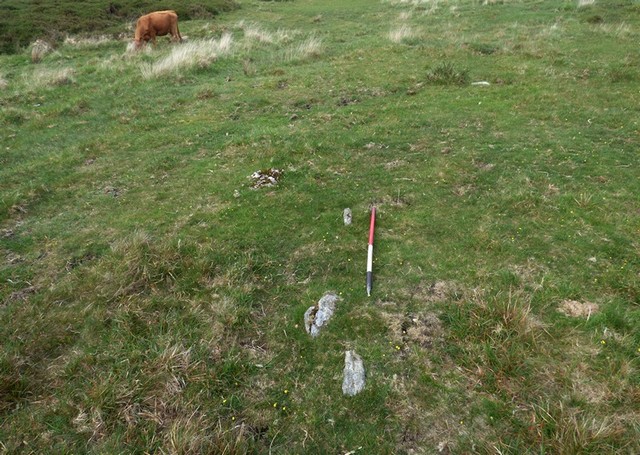 The gap between the two lines of stones is very narrow in places. View from south (Scale 1m).

At this point the alignment of the row shifts towards the east. View from north (Scale 1m).

A typical section of the row which is almost entirely built from small stones. View from north (Scale 1m).

As you walk northward along the row an increasing number of landscape features appear. The row is built within an enclosed valley with extensive views only towards the south along the lower (southern) length. Towards the north (top) this changes and separate tors and other landmarks are revealed one after the other as you progress along the row. A few of these are highlighted below, but others almost certainly remain to be identified. Attaching significance to these reveals is inevitably problematic as any journey up a Dartmoor hill would generate similar reveals. Significant reveals can only ever really be identified where they coincide with prominent locations on the row, such as top or bottom or perhaps a shift in alignment or a particularly notable stone. It is perhaps therefore significant that the landscape reveals found during fieldwork coincided with the length of row consisting of the largest stones. This said given that it is possible to demonstrate that rows were positioned to acknowledge particular places in the landscape the idea that various other reveals were incorporated into the design and layout cannot be entirely discounted and is certainly an avenue of research worth examining.

At this point Rippon Tor which had previously been hidden by a nearby hillside comes into view.

Rippon Tor appears at this point.

At this point Buckland Beacon and the cairn at Corndon appear.

Buckland Beacon appears at this point.

Corndon Tor and cairn appear at this point.

At this point Ausewell Rocks are at the limit of visibility and are framed by the nearby hillside.

Ausewell Rocks suddenly emerge from behind the nearby hillside at this point.

At this point the two large cairns on Corndon Down at SX 68565 74729 and SX 68669 74764 appear on the skyline. Both seemingly sit on the summit of the nearby hillside, but of course they are many miles distant. A visual trick producing a treat which may have been of particular significance to the row builders.

At the top of the row Whittaburrow at SX 73349 75211 is at the limit of visibility perhaps implying a special link with this place.

Whittaburrow emerges from behind the near hillside at the top of the row.