A single stone row measuring 12m long, including at least 11 closely-spaced medium-sized stones situated on a prominent ridge. The row is orientated east to west and stands close to another row and several cairns. The row seems to be earlier than the kerbed cairn with cist at its western end although it has been suggested that this may be a result of a bodged restoration in 1895. Longaford Tor which is not visible from most of the row is suddenly revealed at its western end. 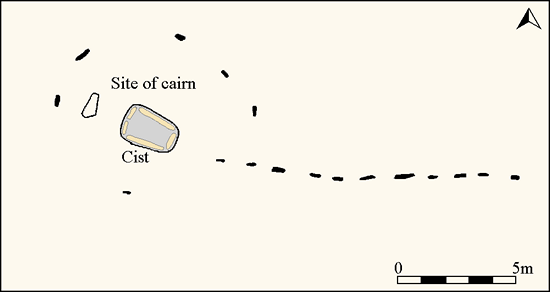 This stone row is of Type S4. Information on this form of stone row and other rows of this type is available here.

Looking west along the row towards the large cist (Scale 1m). 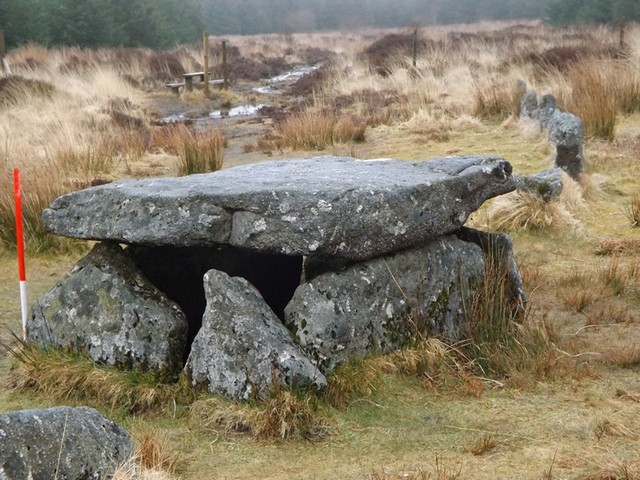 The large cist at the western end of the row (Scale 1m).

Looking over the cist along the stone row.

View from above and west showing the row leading towards the kerbed cairn with cist (Scale 1m).

View from above and south west (Scale 1m). The row appears to be focused on the prominent hill (Haytor) on the sky line.

View from above and east (Scale 1m). The shift in alignment is clearly visible. The distinctive Longaford Tor appears to be the focus of the row. Longaford Tor is not visible at ground level  from most of the row, only appearing as the top stone near the cist is reached. The precision of this reveal strongly supports the idea that this row was carefully positioned to bring the tor into view at the top of the row. Longaford Tor forms the visual focus for other rows in this part of Dartmoor. The precise visual relationships with prominent limit of visibility features in the landscape strongly supports the idea that the rows were carefully positioned to acknowledge “special”  places. In turn it is therefore plausible that these places were incorporated into the rituals.

The row leading towards the upper cist (Scale 1m). The upper stone in the row was incorporated into the cairn and this very strongly suggests that the cairn was built after the row. The upper end of the row was therefore a special  spot before the cairn was erected and it therefore makes sense to see the cairn as being built in a place that already had significance to the people who lived on this part of Dartmoor.

View from above and north. The stone forming the western end of the row (nearest the cist) was incorporated into the later kerbed cairn associated with the cist (Scale 1m).